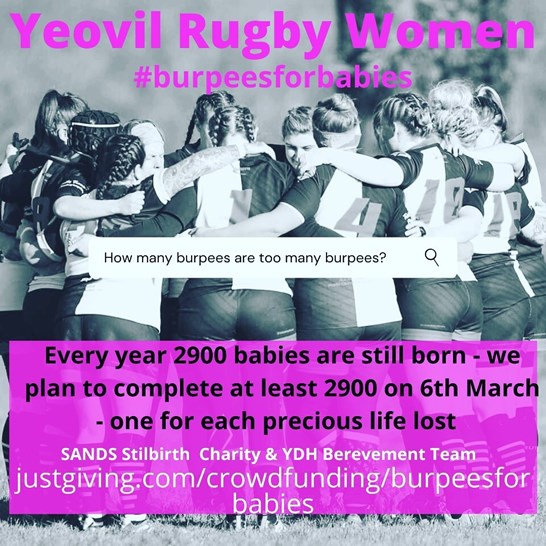 During lockdown our women’s team have been keeping themselves active with a variety of challenges and Zoom workouts to provide some form of team motivation for all our players. Starting in January the women set out fitness goals to work collectively as a team, ensuring individuals had a connection to others as an important strategy towards player mental health. January and February saw individuals completing set tasks to push their fitness levels and to keep each other going during a time when lots of people have found it tough with little else to do. Now with the news of lockdown restrictions coming to an end and the possibility of training returning the women have decided to not only challenge themselves as a team and as individuals but to use the challenge to reach out and support a great charity. The final challenge, which is open to all women players within the team, will provide one final push to encourage a collective goal for a greater cause. Entitled ‘Burpees for Babies’ the women have been tasked with committing to achieve a total of at least 2900 fitness burpees in a single day.

The challenge which will take place on Saturday 6th March has been set for the women to raise awareness of baby loss and to raise vital funds for Yeovil Maternity Units Bereavement Care Team  and the charity Sands. Sands are the leading stillbirth and neonatal death charity within the UK and exists to reduce the number of babies dying, and to ensure that anyone affected by the death of a baby receives the best possible care and support for as long as they may need it.  Statistically around 2900 babies are stillborn every year and Sands provides bereavement support services both nationally through its Freephone helpline, mobile app, online community and resources, and locally through a UK-wide network of around 100 regional support groups. Yeovil Rugby club promoted and challenged the club as a collective to a previous challenge last summer which involved all members of the club setting out to cover a total distance of 12,274km by walking, running or cycling again to raise awareness of the charity and to raise funds. The club smashed this target and completed an astonishing 14,384.4 km, with everyone from our minis and juniors through to our senior men taking part and getting involved. At the time the club raised just over £1000 to support the charity.

Team Captain Bea Chubb who works as a midwife at YDH came up with the idea which has been a huge hit with all the women. As a charity close to her heart the women and coaches are committing themselves to support the idea and the challenge and are looking forward to promoting the charity and raising as much money as they can before the day.

Burpees are not a favourite exercise amongst the team but do provide a great workout for individuals. The plan is for everyone to commit to completing around 100 burpees each which must be done and recorded on Saturday 6th March with the total number being 2900. Each burpee will represent every life lost and hopefully to raise as much money and awareness as possible.

Now as the women begin to prepare for their next challenge, there are a number of ways you can help them:

Donate on the link

Share the link on Social Media, and encourage others to donate or

Send the women some words of encouragement through their Facebook page